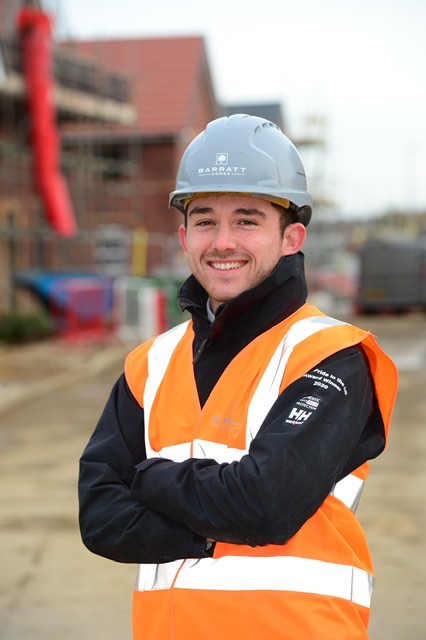 An award-winning former apprentice has taken the next step in his career as a Contracts Manager at Glenvale Park. Jack Davey has risen through the ranks and now plays a key role in the management of our development.

Jack started his career with Barratt Homes in 2010 as an apprentice carpenter, completing his BSc in Construction Management as the University of Northampton alongside his studies. Since then, he has progressed through a range of site management roles and won three NHBC Pride in the Job awards – securing the Seal of Excellence accolade in 2020.

Jack joined us April 2021 and his hard work has recently seen him be promoted from Site Manager to Contracts Manager, leading on key projects and overseeing the day to day running of the Barratt Homes site.

“I’m so proud of the work that I’ve completed during my time at Barratt Homes, and most recently at Glenvale Park. It’s brilliant to be part of a team that invests in the careers of its employees, and despite being part of Barratt for 11 years now it’s great to be able to progress into new and interesting roles.

“Getting to work on the development is really exciting – especially now that the community is coming together and we have customers moving into their new homes. I’m so pleased to be able to play a part in helping the site come to life.”

As part of our social value programme, we will create nearly 900 jobs and apprenticeships during the construction process. This will be in addition to those generated from the commercial elements of the masterplan which include a community centre, two primary schools and retail facilities.

“Glenvale Park has always been about delivering more than new homes. It’s about building a new community which will benefit local people, including those who work with us. People like Jack are a real asset to not only their developers on site, but to Glenvale Park as a whole.

“As part of our commitment to delivering benefits to the community, Glenvale Park will create and develop almost 900 jobs – watching this come to life in cases such as Jack’s is very inspiring.”